Skip to content
There was once wolf that one day strayed into a village and met a domestic dog. They talked to each other and became friends, as you would expect of distant cousins who run into each other by chance. The wolf was hungry and the dog shared a few of his biscuits with the wolf, who was surprised to see that the dog gets the most exquisite food items without having to search or hunt for them. The dog was also excited to see the freedom enjoyed by the wolf – he could wander wherever he wanted, do whatever he liked to, and there was no belt around his neck. They were both tempted by the others’ way of life, and wanted to know more about it.The dog began describing how it had to live within the four walls of his master’s compound, how he had to bathe regularly and always remain clean, how he was expected to behave properly in front of guests, how irritating the belt around his neck was, and so on. But he still got the best dog food every day and had a master who loved him and cared for him. If the wolf stayed, the dog could somehow convince his master to take care of his new-found friend. No, the wolf did not want to exchange places with the dog any more, because even the thought of a life under such discipline and regulation was revolting to the wolf that had always been in the wild.

He offered to take the dog with him to the forest, where he would have a life of fun and freedom. And occasionally, the wolf added, they’d have to remain hungry. Sometimes, they’d attacked by larger beasts of prey, chased by villagers if they stray out of the woods. It’s only during the peak of summer though, that they’d have to go without water and, that too, only for a few days. And raw meat from an abandoned carcass was the most luxurious feast they could hope for. It was now the turn of the dog to realize how blessed a life he led. To live without food and water, to subsist on raw meat, to be in constant fear of hostile beings – is freedom worth so much?

They were both happy the way they were, and wanted to continue thus as long as they could. The wolf went back to the woods with a resolve to celebrate his freedom and the dog became even more loyal and grateful to his master. 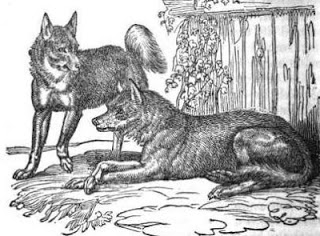 This is based on a story in my primary school Malayalam text book (that I read more than 20 years ago). I can only vaguely remember the main theme and concept, and am not sure if the thread developed here is consistent with the message that was intended to be conveyed in the original story!

2 thoughts on “How Much is “Freedom” Worth?”